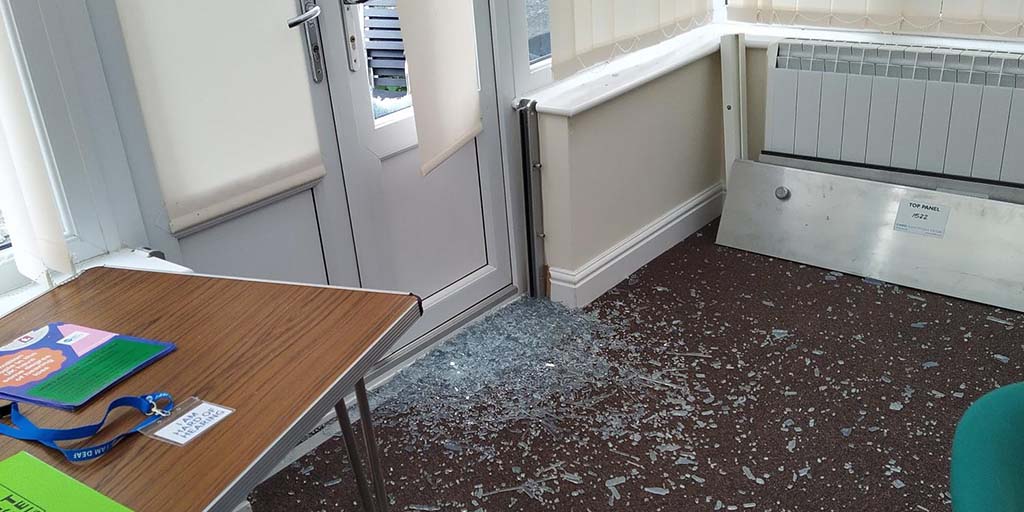 Over the weekend of 11th-12th June our centre on Castle Street in Kendal was broken into, causing damage and several items stolen. The culprit attempted to set fire to an external door but failed to gain entry, they then threw a rock into one of the conservatory windows. Damage was done to all the internal door locks, keypads, doors and the bar safety shutter. The glass from the shattered window was strewn across the conservatory floor and the shillied yard. Thankfully no-one was harmed in the incident. A police officer and a crime scene investigator both attended and were thorough in their investigations.

On Tuesday 14th June the deaf club were due to meet in the Barrow centre but were prevented from doing so because someone had broken pins off in the door lock. This was the second time in three months that the door lock had been tampered with, resulting in calling out a locksmith on both occasions.

We are insured for the basic and fabric of the building but there is much work to be done now to an effort to prevent future crime, improve security and replace some of the sentimental items that were stolen. It is also important that we offer emotional support to our deaf community, especially those who experience higher levels of anxiety following the covid pandemic with all its restrictions and additional barriers to communication.

On Tuesday 22nd June the story of the break-in and vandalism was covered on ITV Border News.

Locally we have been offered support from companies and organisations, should we need temporary accommodation or meeting rooms until our Kendal office is fully operational again. We are so grateful that we are based in a supportive community who share what they can in times of need.